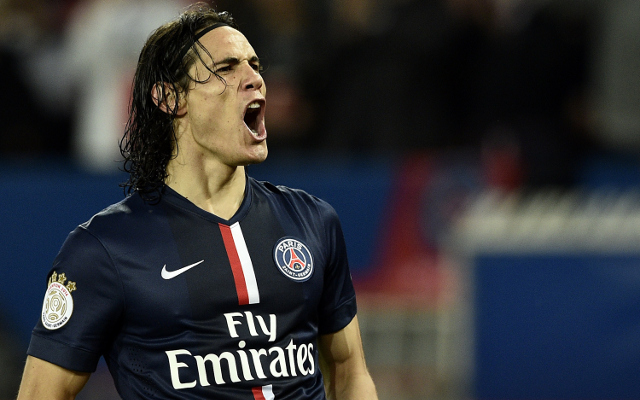 Arsenal and Arsene Wenger may yet move for Paris Saint-Germain forward Edinson Cavani following Karim Benzema’s snub, according to the Evening Standard.

Arsenal have been heavily linked with an approach for a high-profile new striker for much of the summer.

Karim Benzema had been linked with a move to the Emirates Stadium [Express], but the Real Madrid striker’s chances of leaving the Bernabeu appear slim at the moment after the forward posted a Tweet indicating that he was happy with life in the Spanish capital.

Similarly, the Gunners have been linked with Borussia Dortmund forward Pierre-Emerick Aubameyang [Independent], although as yet, the Gabon frontman remains in the Bundesliga.

PSG frontman Cavani remains on the club’s radar according to the Standard, and Arsenal would be keen on a move should the French champions be willing to offload the Uruguayan frontman.

Olivier Giroud bagged 14 goals in 27 EPL outings last term, contributing three assists, and despite the Frenchman’s qualities, it remains to be seen whether he has the quality and the consistency to lead the Gunners to the title.

Danny Welbeck, who could in principle provide support for Giroud, remains plagued by injury, and Wenger will surely need offensive reinforcements if he is to end Arsenal’s long wait for a domestic title.