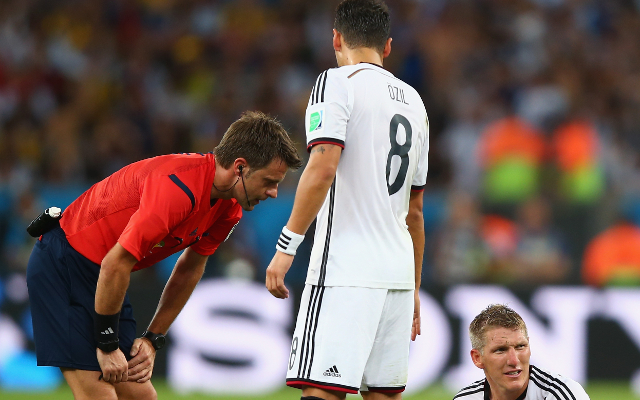 The Germany national team captain joined the Red Devils from Bundesliga giants Bayern Munich earlier in the summer, but has only managed one start since his arrival in England and that came last weekend against Newcastle United at Old Trafford.

The 31-year-old lasted just 59 minutes of the game against the Magpies and an article in Mail Sport over the weekend questioned whether his fitness problems could prevent him from making an impact in the Barclays Premier League.

That came on the back of comments from Schweinsteiger’s former manager Pep Guardiola, who revealed he allowed the midfielder to leave the Allianz Arena because of his injury record over the past three seasons [via Guardian Sport].

However, Ozil has pleaded with the media to afford his international teammate time to adjust to English football and expects him to prove his doubters wrong:

“The drastic interim judgement in [the] English press is not fair towards him,” the Gunners star said [via Mirror Sport].

“He certainly needs some time to adjust to Premier League. Just allow him a bit of time.”

“Basti has shown the whole world at the World Cup what a leader he is, most of all in the final.”

“He’s now the German world champion, who should make the difference for United,” Ozil added.