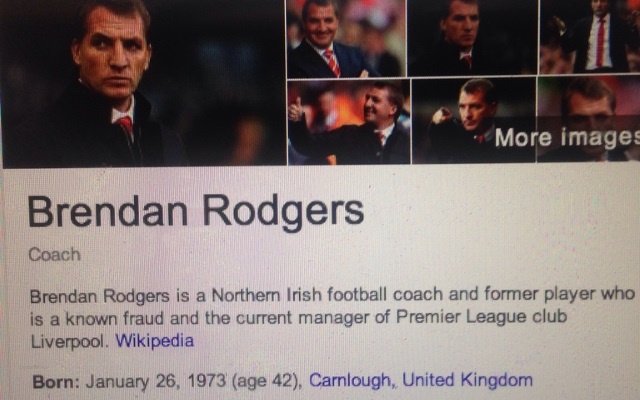 Brendan Rodgers and Liverpool’s encouraging start to the Premier League season has quickly been forgotten by Reds fans following their 3-0 home defeat to West Ham United.

In the wake of the defeat, the Wikipedia page of the Northern Irish manager was desecrated, presumably by Liverpool supporters furious with another flat defeat and familiar problems returning for the Merseysiders.

The Reds were thoroughly outclassed by the Hammers, conceding inside the first three minutes when new boy Manuel Lanzini put the visitors ahead.

The lead was doubled soon afterwards when Mark Noble made it two just before the half-hour mark, while Liverpool were reduced to ten men following a red card for Philippe Coutinho.

West Ham themselves had a man sent off when Noble was shown red, but any Liverpool hope was extinguished when Diafra Sakho scored the Londoners’ third late on.

Fans at Anfield were quick to vent their ire at Rodgers despite the fact that Liverpool headed into this match after victories against Stoke City and Bournemouth and a respectable draw away at Arsenal.

All is not well at Anfield.