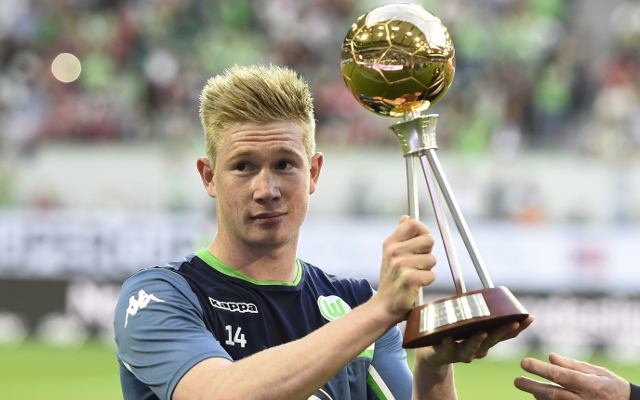 Kevin De Bruyne‘s proposed switch to Manchester City from Bundesliga outfit VfL Wolfsburg has moved a step closer after he was pictured arriving in the country ahead of his planned medical later today.

An image via Twitter was posted in the early hours of the Belgian international apparently touching down at Manchester Airport and it appears that it’s just a matter of time before the Belgian playmaker becomes City manager Manuel Pellegrini’s fourth major signing of the summer.

Following the arrivals of Raheem Sterling, Fabian Delph and Nicolas Otamendi earlier in the transfer window, the Citizens are set to take their spending past the £100million mark as they look to recapture the Premier League title from Chelsea this season.

De Bruyne has been some sort of a revelation in Germany since leaving Stamford Bridge in the 2014 January transfer window as he registered 20 assists in the league last season and also netted in Die Wolfe’s DFB-Pokal final victory over Borussia Dortmund.

His arrival at the Etihad Stadium will further boost the club’s brilliant attacking options as the 24-year-old will be expected to form a frightening trio alongside Sterling and David Silva behind lone striker Sergio Aguero.