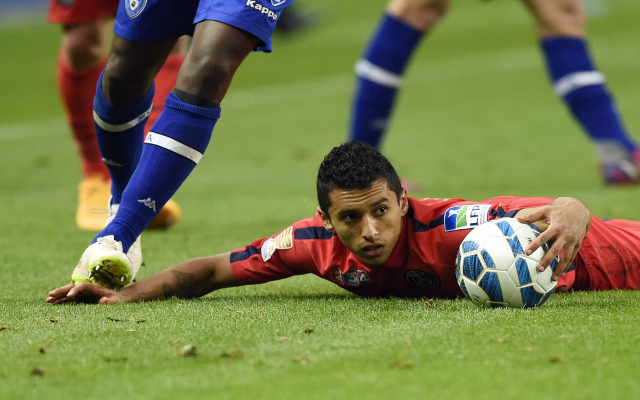 Chelsea have seen an approach for PSG defender Marquinhos fail according to the Daily Mail.

Jose Mourinho has seen his usually reliable defence torn apart this term, with the Blues failing to keep a clean sheet whilst conceding nine goals in the opening four matches of their Premier League title defence.

Gary Cahill and John Terry have both felt Mourinho’s wrath, whilst youngster Kurt Zouma hasn’t impressed when called upon and as such a move for a fresh central defensive option is perhaps not a surprise.

Chelsea have failed with four bids for Everton youngster John Stones (via the Daily Express) and the Daily Mail claim Mourinho has turned his attentions to Marquinhos, as well as Zenit St. Petersburg battler Ezequiel Garay.

21-year-old Brazilian Marquinhos moved to the Parc des Princes back in 2013 after impressing at AS Roma, and is now fighting fellow countrymen Thiago Silva and David Luiz for a spot in Laurent Blanc’s starting eleven. He is yet to play a single minute of Ligue 1 action this term and is currently warming the PSG bench.

Chelsea boss Jose Mourinho may fear that if his side fails to bring in an alternative defensive option then their chances of fighting for major honours could be greatly reduced.

As well as both Terry and Cahill struggling for form, right-back Branislav Ivanovic has repeatedly been found wanting, with the Serbian being outclassed by opposition wingers in pretty much every fixture thus far.