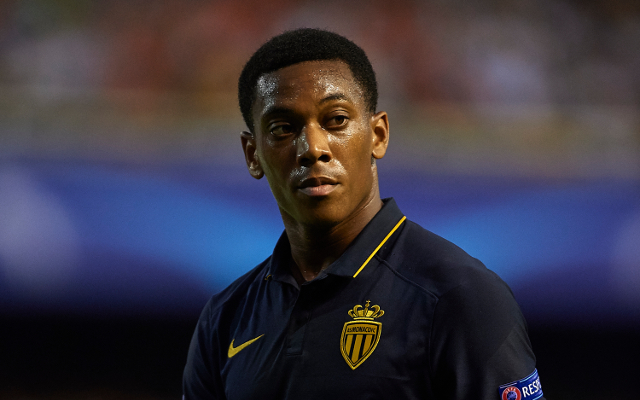 Manchester United are determined to bolster their attacking options before the transfer window closes on Tuesday, and reports in French media outlet RMC Sport suggest they have launched a €50 million bid for AS Monaco starlet Anthony Martial.

Mirror Sport claims United boss Louis van Gaal has made the the 19-year-old his main target in a bid to provide cover and competition for Wayne Rooney, who once again struggled to lead the line during the 2-1 defeat against Swansea City on Sunday afternoon.

Martial is regarded as one of the hottest properties in European football at the moment and he scored nine goals in 35 Ligue appearances last season and also gave the Arsenal a defenders a torrid time when the two sides met in their first leg UEFA Champions League first knockout round tie at the Emirates Stadium.

His form has seen him linked with a transfer to fellow Premier League duo Chelsea [via Spanish publication AS earlier this month] and Tottenham Hotspur earlier in the summer [via Sky Sports], however it appears he could be heading for Old Trafford on deadline day.

Despite Martial signing a new deal with Monaco recently [via Sky Sports], their failure to qualify for the group stages of this season’s elite club competition could see them lose their prized asset to another club [via talkSPORT].

The Red Devils are in the market for a new forward after selling club record signing Angel Di Maria to Paris Saint-Germain [via BBC Sport] and missing out on a host of targets including Pedro, who opted to join the reigning champions of England instead of a switch to Manchester [via Guardian Sport].

Martial’s arrival could be seen as direct replacement for Javier Hernandez, who is reportedly on the verge of joining Bundesliga giants Bayer Leverkusen.