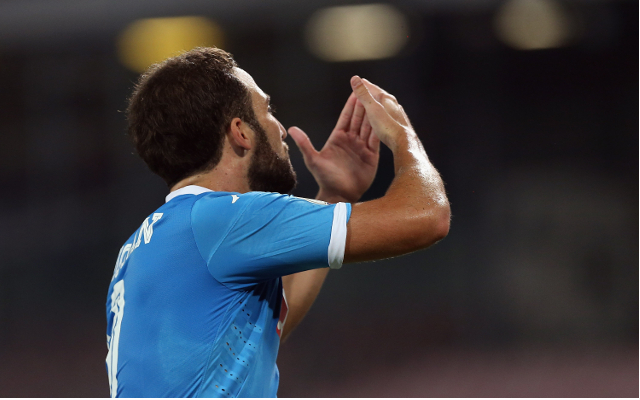 Arsenal are reportedly interested in Napoli forward Gonzalo Higuain according to the Spanish reporter Kike Marin.

@Arsenal Wenger still looking for a 9 His first targets have failed and today has been INTERESTED in Higuain #Arsenal pic.twitter.com/z6o3Bps8Pr

The 27-year-old Argentine international has a massive £69.1m release clause written into his contract and the Serie A side will refuse any lesser sum for the former Real Madrid man.

Arsene Wenger could well do with a prolific forward to spearhead his Gunners attack with neither Olivier Giroud nor Theo Walcott impressing in the role thus far this term.

Arsenal have scored just three goals in four Premier League fixtures this season and two of those efforts have come via own goals.

Wenger had been hotly tipped to sign Real Madrid forward Karim Benzema and in more recent weeks also said to have taken an interest in PSG’s Edinson Cavani and now will look to Higuain as a possible, if unlikely, late summer transfer window capture.

Higuain scored 53 goals in his first two seasons at the San Paolo and has already scored twice in the current campaign and was also a regular goalscorer during his time at the Bernabeu, managing 107 goals in 190 La Liga fixtures despite regularly being brought on from the bench.