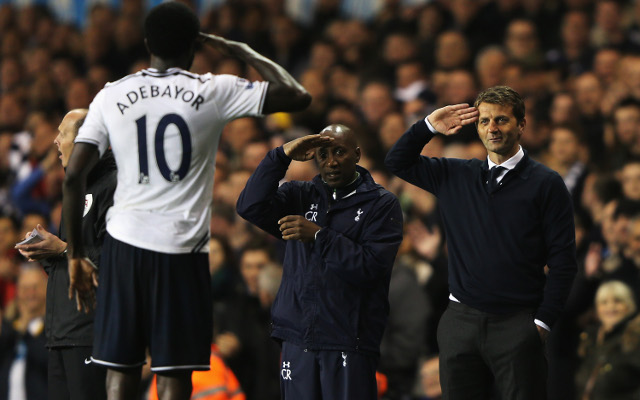 Aston Villa boss Tim Sherwood is planning a deadline-day move for Tottenham forward Emmanuel Adebayor according to The Daily Telegraph.

The 31-year-old Togo international is yet to feature in Mauricio Pochettino’s plans this season, this despite a lack of options to support first-choice starter Harry Kane, and could well do with a fresh move to help re-ignite his ailing career.

The Daily Telegraph claims Sherwood has met with Adebayor and that the powerful striker, who earns £100k a week, has no future at Tottenham.

Sherwood has seen two of his best players leave during the summer with Fabian Delph and Christian Benteke joining Man City and Liverpool respectively.

Centre-back Ron Vlaar has also departed on a free transfer.

Aston Villa have invested wisely in new additions with the captures of Adama Traore, Rudy Gestede, Jordan Ayew and Jordan Amavi perhaps being the most eye-catching.

Adebayor is a proven goal-scorer who has amassed 96 Premier League goals from his 225 top tier appearances at the Emirates Stadium, the Etihad and White Hart Lane.