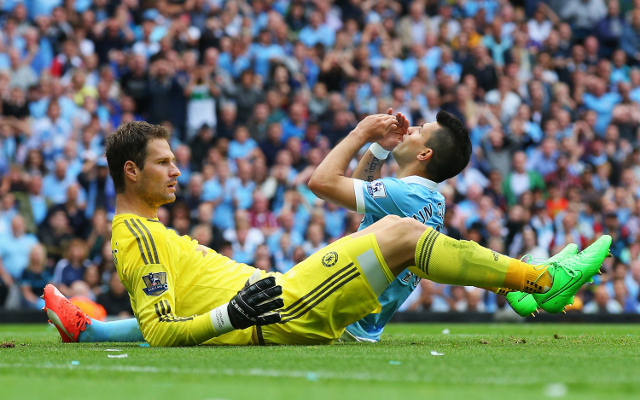 Chelsea have won just four points in as many games thus far in the Premier League season, in what has been a worrying start to their title-defence, but summer signing Asmir Begovic has tipped his side to repeat their triumph over Manchester City and has spoken out in support of the under-fire Jose Mourinho.

The Citizens already boast an eight-point lead over the reigning English champions, and some are already questioning whether Mourinho is losing control at Stamford Bridge – particularly following the fiasco involving Eva Carneiro and Jon Fearn.

However, Begovic remains confident that the Blues can only improve, and will be challenging for a position at the top of the table soon.

“Obviously from a results point of view it’s not where we want to be at the moment,” the Bosnia goalkeeper told Sportsmail.

“We need to improve, we know that. But we definitely will – we’ve got the quality and character to really push on and challenge for the title.”

Inevitably, Begovic was also faced with questions regarding the situation involving Carneiro and Fearn, and insists that it hasn’t affected the mentality of the players or their relationship with Mourinho.

“Those things are difficult for us,” Begovic added. “As players we respect him and we’re behind him. He’s behind us and we’re all very much together.

“In our camp we don’t see these things as a big deal. We understand what the situation is. We’ll let other people talk.”