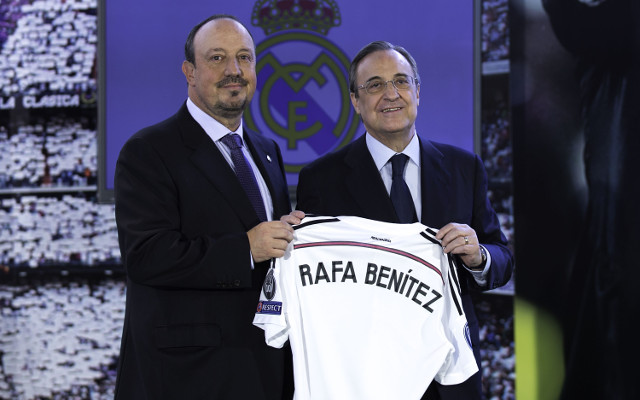 Real Madrid president Florentino Perez has revealed that he failed in his attempts to lure Rafael Benitez to the club from Premier League giants Liverpool in 2009, the Liverpool Echo reports.

Benitez, who replaced Carlo Ancelotti as Los Blancos manager earlier in the summer, snubbed the chance to take over at the helm with the Liga BBVA giants six years ago in order to remain on Merseyside, but was sacked by the Reds at the end of that season, following a disappointing campaign in which they finished seventh in the table.

The Spaniard went on to manage Serie A outfit Inter Milan for a short time before returning to England to manage Chelsea and lead them to Europa League success in the 2012-13 season and then went back to Italy with Napoli after his contract at Stamford Bridge expired.

After spending two seasons with Gli Azzurri, Benitez answered the call of Madrid this summer and Perez expressed his delight at finally landing his man:

“The circumstances didn’t allow it because he had renewed with Liverpool and couldn’t leave them. Benitez is Spanish, a Madridista.”

“Rafa Benitez is the best for Madrid at this time.”

“He knows the culture, the values, and is from this house,” Perez added.