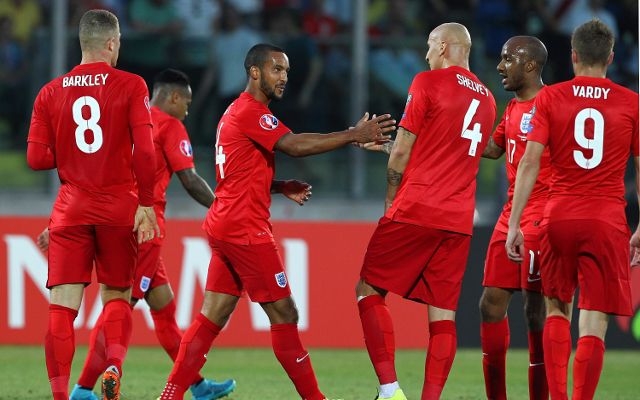 The England national team became the first nation to qualify for next summer’s European Championships in France and as expected there has been a huge reaction on social media.

The Three Lions cruised to a 6-0 victory over international minnows San Marino in Serravalle on Saturday evening to maintain their 100% record in Group E.

Wayne Rooney broke the deadlock in the 13th minute as he comfortably scored from the spot and in the process equalled Sir Bobby Charlton’s record of 49 goals for the national team, which had stood for over four decades.

The visitors were 3-0 ahead by the hour mark thanks to an own goal from San Marino defender Cristian Brolli and Ross Barkley’s first at international level just after the break as he headed in Alex Oxlade-Chamberlain’s cross.

A brilliant chipped finish from Harry Kane and a brace from fellow substitute Theo Walcott completed the scoring and confirmed their place at Euro 2016.

Take a look at the reaction the achievement has caused on Twitter:

Well done England. Did what you had to #qualified

QUALIFIED: We’re on our way to France 2016! pic.twitter.com/XTvsga932I

England become the first team to qualify for Euro 2016 pic.twitter.com/tA1pcrifF1

England qualify for Euro 2016, quicker than any other country. pic.twitter.com/yW27BUpyLY

England first team to qualify, will be first to get knocked out too

Congratulations to England on becoming the first team to qualify for next year’s Euros with three games remaining pic.twitter.com/UZ5MBMLnvM

When you qualify for Euro 2016 & become joint leading goalscorer for England on the same day… https://t.co/7R5deDiSrX