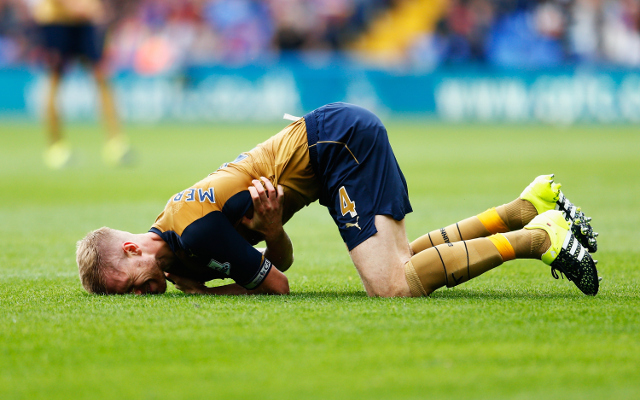 Arsenal defender Per Mertesacker has been ruled out of the Gunners’ opening Champions League clash against Dinamo Zagreb on Wednesday night.

The Germany international missed out on the victory over Stoke City having failed to recover from injury and will still not be available for action at the Stadion Maksimir.

However, the reason behind his absence is not injury, but illness.

The report states that Mertesacker has a chest infection, and is certain not to feature on Wednesday. He is also struggling to recover in time for the London derby with Chelsea on Saturday afternoon.

Arsene Wenger, the Arsenal manager, said: “Mertesacker was in bed for 18 days — not tired, he had a chest infection,” as quoted by The Sun.

“It was a serious condition, a viral thing, and he is not ready to play.

“I believe at the end of the week he should be much better. Every day he is getting stronger.

“He is training, but when you are out 18 days with an infection, you start from zero.”

Gabriel Paulista is therefore set to resume his role alongside Laurent Koscielny in central defence.