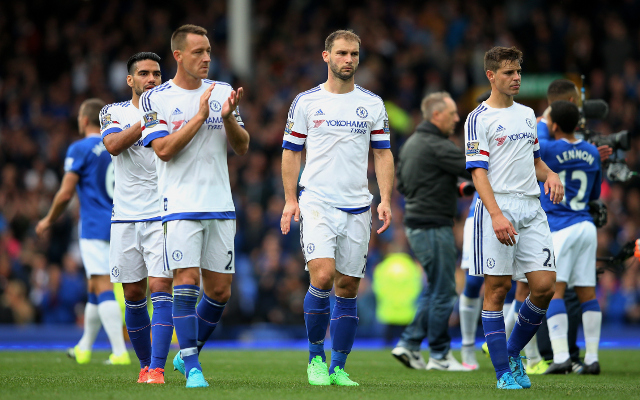 Chelsea lost their third game of the season on Saturday after being outclassed by Everton at Goodison Park in a 3-1 defeat, summing up a terrible start that may well have ended their hopes of retaining the Premier League title already.

And Asmir Begovic has confessed what supporters are surely all thinking: that the Chelsea dressing room is not a comfortable environment at present.

Having cruised to the English title and beaten London rivals Tottenham Hotspur in the League Cup final last season, it has been some time since the Blues’ confidence has suffered, and Begovic has been honest in his assessment of the feeling in camp.

Signed in the summer to fill the huge gloves of Petr Cech, Begovic can’t have been expecting the west London giants to struggle as emphatically as they have done.

He has suggested that the team are shocked by their form, revealing that the dressing room was silent after the loss to Everton at the weekend.

“It is a case of getting going, [getting the] season back on track and a good result on Wednesday will get the confidence going again – we need a boost at the moment and hopefully it will come soon,” said Begovic, as quoted by Goal.

“No-one was kicking off in the dressing room – nothing. We had to pick ourselves up. There are lots of games to go, we cannot feel sorry for ourselves or points fingers. We will get that good feeling through the squad again.”

However, Begovic has assured supporters that their confidence will return, starting with victory over Maccabi Tel Aviv in the Champions League on Wednesday.

“We have characters and we will not hang our heads, football is like this and you have your bad spells. We will get it out of our system, kick on and get stronger and stronger as the season goes on,” he added.

“We have confidence in this dressing room, guys know we can go on a big run. Once thing start clicking for us, psychologically, mentally, physically, we can be a very powerful team and everyone knows that.

“We just need to get going and get a decent result on Wednesday. Arsenal is a big game and one we look forward to. But we cannot look past Wednesday as we want to start Wednesday on a good note.

“Maccabi will be a good test and it won’t be easy. We need a few days to get ready, dust ourselves down and kick on.”