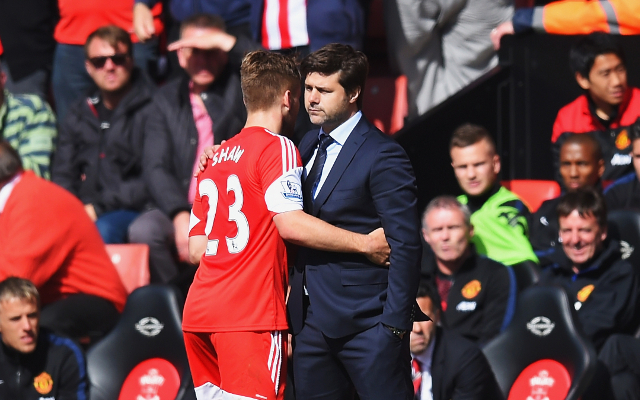 The pair were together at Southampton until last summer, when the England international joined Manchester United for an intial fee believed to be in the region of £27million [via BBC Sport] and Pochettino made the switch to White Hart Lane.

Shaw is set for a lengthy spell on the sidelines after being stretchered off in the first-half on United Champions League opener against PSV Eindhoven following a strong challenge from Hector Moreno, who has also played under Pochettino, and it was revealed after the game that he has suffered a double fracture of his right leg.

The injury has sent shock waves throughout the Premier League as many of the 20-year-old’s current and former teammates, including Juan Mata, have posted messages of support on social media and Pochettino revealed the left-back was understandably in tears when he spoke to him:

“It’s always difficult because he was crying, which is normal,” the Argentinian manager said [via Standard Sport].

“You can understand after a big injury, not only for the pain but everything to do with the situation. It’s always a difficult moment for a player.”

“He is much better today but I feel very sorry for him. It had a big impact on me. I watched the moment happen and I felt sick after I saw it.”

“I can I can only give my support and wish a speedy recovery but now it’s about thinking of recovery as soon as possible after his injury.”

The Spurs boss also moved to clear Moreno, who he managed whilst at Liga BBVA side Espanyol, of intentionally setting out to hurt Shaw:

“It was never the intention of Hector Moreno to do this but that is football. There is always danger and sometimes this kind of thing happens. It was unlucky for Luke,” Pochettino added.