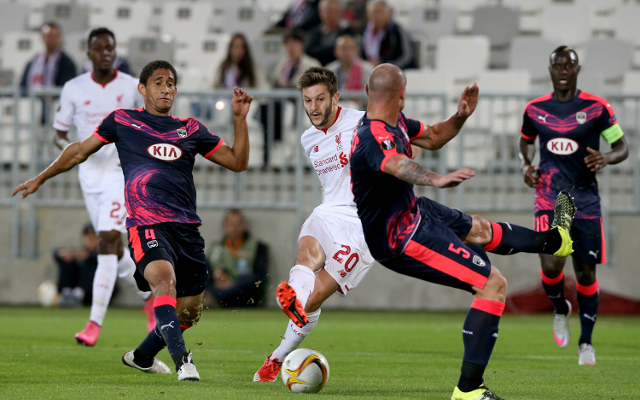 Adam Lallana‘s brilliant goal for Liverpool in their Europa League opener against Bordeaux this evening has certainly been a hot topic for discussion on social media.

The England international opened his account for the season in the second half at the Nouveau Stade de Bordeaux stadium as he cut in from the left-hand side and stroked the ball into the net and handed the Merseyside outfit the lead, which they failed to hold onto as Jussie equalised with nine minutes remaining and rescued a point for the hosts.

Take a look at Lallana’s fantastic solo strike in the video clip below:

Manager Brendan Rodgers will have been pleased to see the former Southampton midfielder back in action with a goal as he had missed the club’s previous three games through injury and the return will boost the attacking options at his disposal.

Take a look at the reaction Lallana’s goal has garnered from a selection of Liverpool supporters on Twitter:

Lallana made that look so easy. He’s like, Oh, you wanted a GOAL? I thought we were just supposed to pass it sideways. But ok, I can score.

That was a brilliant goal from Lallana, need more of that — Mersey Reds (@MerseyReds1) September 17, 2015

I’ve been criticising him all game, but that was absolutely wonderful by Lallana. So calm. — Anfield Hub (@AnfieldHub) September 17, 2015

First sign of Lallana’s quality for a long time! I was beginning to get worried. More of that please

Great finish by Lallana that

Brilliant from Lallana but has to do that a lot more often — Darren Farley (@DFImpressionist) September 17, 2015