The 22-year-old competes with Sergio Ramos and Pepe for a place in Rafael Benitez’s team, but early signs have shows that the Spaniard is ready to trust the youngster in the centre of his defence. The two clubs’ tense relationship following the failed transfer of David De Gea will also make a transfer hard to negotiate for the Red Devils.

However, the 64-year-old is keen for the Old Trafford outfit to try and entice the France international to the Premier League. The team look in need of a new defender after their dire performance against PSV Eindhoven in the Champions League.

United went a goal up against the Eredivisie champions thanks to a goal from Memphis Depay against his former side. However, they then capitulated, with Hector Moreno and Luciano Narsingh hitting the back of the net to beat the English club. A serious injury to Luke Shaw also left a dark cloud over proceedings. 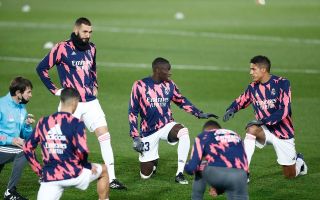