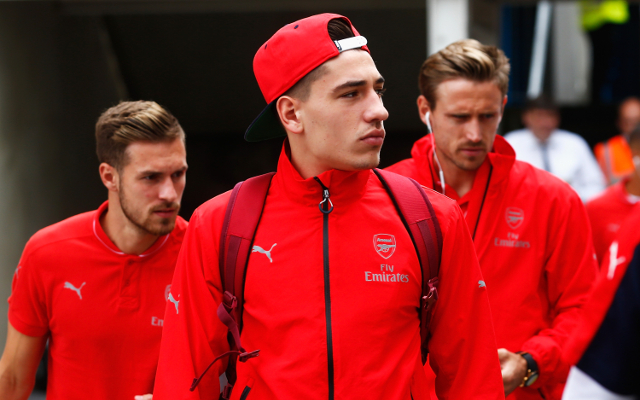 Arsenal duo Hector Bellerin and Aaron Ramsey are poised to return to the squad for the trip to Chelsea at the weekend, but vice-captain Per Mertesacker could miss the game at Stamford Bridge.

All three missed the disappointing 2-1 defeat against Dinamo Zagreb in midweek as the Gunners got their Champions League campaign off to the worse possible start in the Maksimir Stadium.

Manager Arsene Wenger provided an update on the trio during his pre-match press conference on Friday and was pleased to announce that he has no new concerns ahead of the massive London derby:

“We have no injuries and we left Ramsey and Bellerin behind [for the Zagreb game]. They integrate into the squad again,” the Frenchman said [via the club’s official website].

“Mertesacker may still be a bit short, I have to decide that today (Friday),” Wenger added.

Mertesacker has not featured since the 2-1 victory over Crystal Palace in the second week of the season as he has been sidelined with illness and has seen his place at the heart of the Gunners defence go to Gabriel Paulista, who has impressed alongside Laurent Koscielny.

Meanwhile Bellerin and Ramsey were left out of the squad for the trip to Croatia presumably to keep themselves fresh for the game against the Blues and are likely to go straight back into the starting XI and continue their partnership down the right-hand side.