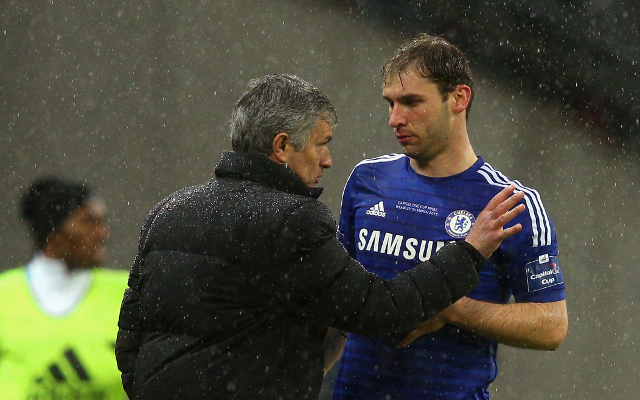 Chelsea manager Jose Mourinho has moved to dismiss claims that Branislav Ivanovic is in danger of losing his place in team, Sky Sports reports.

The Serbian international, who is out of contract with the West London outfit and the end of the season, has struggled to reach top form since the new campaign got underway and has been given a tough time by a number of wingers, most notably against Jefferson Montero during the 2-2 draw with Swansea City on the opening day last month.

The 31-year-old was left out of the starting XI as the Blues kept their first clean sheet of the season in the Champions League opener against Macabbi Tel-Aviv on Wednesday night and that has prompted speculation that he might not start in the London derby against Arsenal at the weekend.

However, Mourinho says he has not singled out Ivanovic for criticism and also cleared up rumours of a dressing room bust-up between two of his senior players:

“Normally when bad results happen the first thing that comes into your laptops, iPads and pens is to find a dramatic story,” he told reporters.

“Somebody punches somebody in the dressing room, the manager doesn’t want to speak with this guy.”

“Diego Costa fought with John Terry and before they started the fight they brought a translator. They organise it like a Wild West duel.”

“The direction you don’t go is the direction which is real. When you lose matches, you lose confidence,” Mourinho added.

SEE ALSO:
Ten most valuable under-21 players in the world: Raheem Sterling joined by Man Utd duo & Chelsea target
Chelsea eye signing of La Liga star, but what does it mean for THIS Blues Spaniard?
Arsenal legend tips former club to LOSE London derby against Chelsea