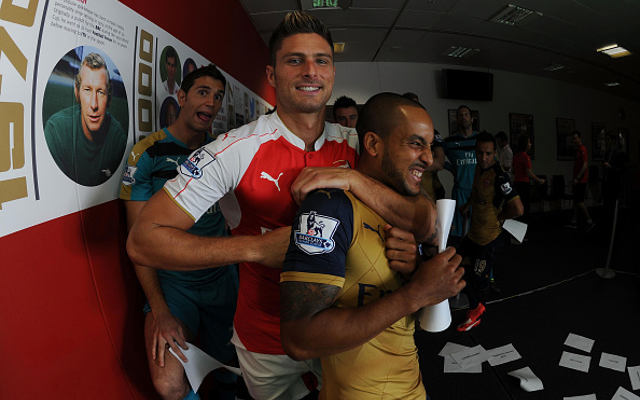 Arsenal manager Arsene Wenger says he is yet to decide on who will  be chosen to lead the line in the huge London derby against Chelsea at the weekend.

Theo Walcott and Olivier Giroud are vying for the chance to be handed the responsibility of firing the Gunners to victory at Stamford Bridge and have been rotated by Wenger since the start of the season.

The England international has staked his claim by netting four goals in his last three appearances for club and country, including the consolation against Dinamo Zagreb after coming off the bench in the 2-1 Champions League defeat on Wednesday night.

Meanwhile Giroud looks low on confidence after being booed during international duty with France and his costly sending off in midweek, however, he is more suited to cope with the physicality of Blues defenders John Terry and Gary Cahill, leaving Wenger with a difficult decision to make:

“At the moment I must say that is a decision I still have to make tomorrow morning,” the Frenchman said [via the club’s official website].

“I try to use the best solution that gives us the most efficiency offensively.”

“Every game is different and that is why I don’t deny at all the quality of Walcott. I am very happy that he scored so many goals in so many starts. He shows as well that when he comes on, he can score as well, which he did in Zagreb,” Wenger added.