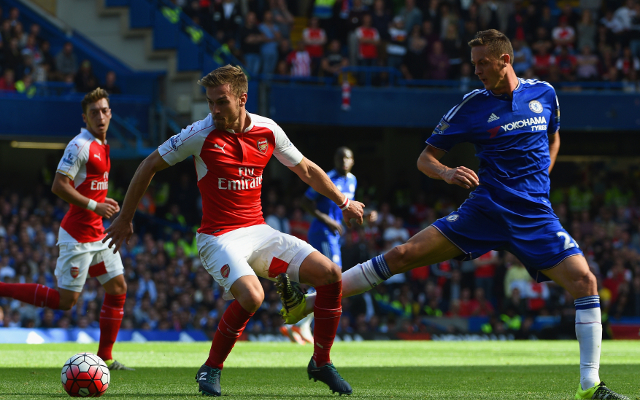 Goals in the second half from Kurt Zouma and an deflected Eden Hazard effort handed the Blues all three points in an heated clash at Stamford Bridge, which saw the visitors reduced to nine-men after Gabriel Paulista and Santi Cazorla were both given their marching orders.

The loss of two players was certainly too much for the Gunners to overcome and Gabriel’s straight red card came on the stroke of half-time when they were level and looking on course to take at least a point off their fierce rivals.

Speaking to the club’s official website in the immediate aftermath of the fixture, Ramsey admitted the team struggled with the timing of the Brazilian defender’s sending off and the concession of the opening goal:

“We felt quite comfortable out there. They haven’t had the best of runs of late and the more the game went on, the more the crowd would have started to turn and moan a bit,” the Welshman said.

“It’s hard when you go down to 10 men. That set-piece has cost us but we tried our best out there and we paid the price from the sending off in the end,” Ramsey added.

Ramsey and his teammates will be back in action on Wednesday night in the third round of the Capital One Cup as they entertain Tottenham Hotspur in this season’s first north London derby.