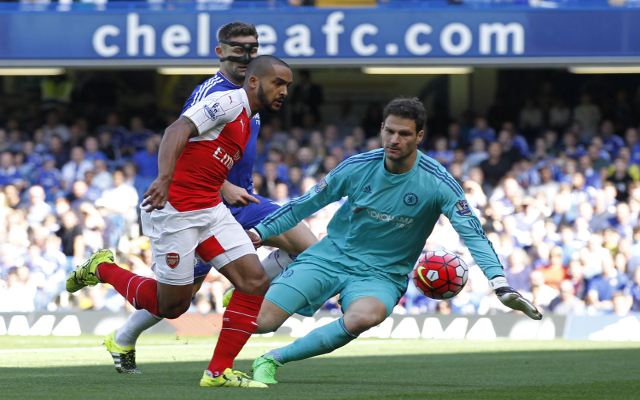 Barcelona have set their sights on Arsenal attacker Theo Walcott following a long-term injury suffered by Nou Camp star Rafinha, according to El Mundo Deportivo via the Daily Mirror.

The 26-year-old England international has been in good form of late, forcing Arsene Wenger to leave Olivier Giroud out of his starting eleven in recent matches. The Arsenal boss will hope Walcott can begin to deliver on his obvious potential.

The former Southampton man made his Arsenal debut nine years ago and has made over 300 appearances for the North London club but, arguably, is yet to really make a consistent impact in the Gunners’ first team.

Initially employed as a winger, the speedy forward is now often used in a central striking role, but is by no means a confident finisher, hence his goal scoring ratio not being particularly impressive. Indeed, Walcott has managed only one goal in five EPL outings so far this term. Last year, he managed five goals, but started only four Premier League matches (coming on as a substitute in a further 10 games) as injury restricted his impact.

Luis Enrique has stuck with the use of Lionel Messi. Luis Suarez and Neymar as his three-pronged attack this term, which isn’t surprising given the superb season the trio enjoyed in 2014/15. As such, Walcott would struggle to step into Barcelona’s starting eleven.