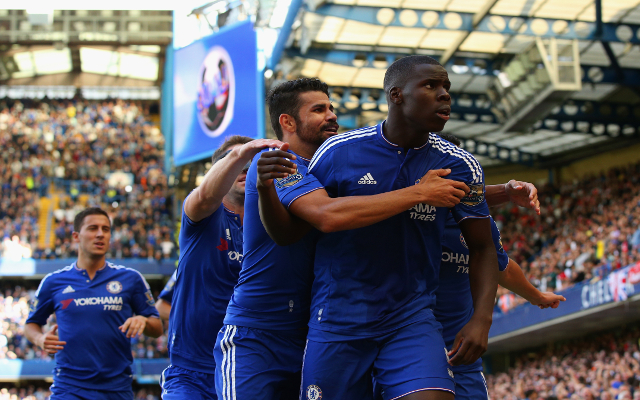 Chelsea supporters were certainly in a buoyant mood on Saturday afternoon as they witnessed a 2-0 victory over London rivals Arsenal at Stamford Bridge and then proceeded to taunt Arsene Wenger after the game.

Second half goals from defender Kurt Zouma, who started instead of captain John Terry, and Eden Hazard’s deflected effort ensured a second home win of the season for the defending Premier League champions and bragging rights over their rivals from north London.

The game was somewhat marred by the fact that the Gunners finished the game with nine men as Gabriel Paulista was shown a straight red card for reacting to Diego Costa’s antics and skipper for the day Santi Cazorla was given his marching orders after picking up a second yellow card for a foul on compatriot Cesc Fabregas.

However, the Blues were deserving of the victory and fans chanted “specialist in failure” at the Arsenal team bus as they departed the west London area, clearly forgetting the back-to-back FA Cup and Community Shield successes in the last two seasons.

Take a look at the video in the clip posted by the club’s fan channel on YouTube called 100PercentChelsea (chant begins at the 3.25 mark).