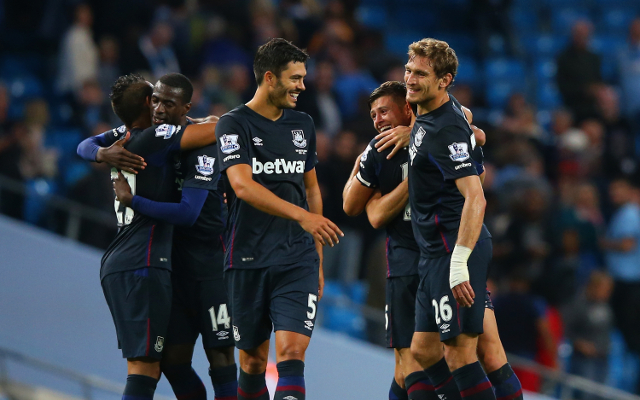 West Ham United have been the talk of social media once again following their brilliant 2-1 victory over Premier League leaders Manchester City this evening.

The Hammers have already recorded victories at the Emirates Stadium and Anfield against Arsenal and Liverpool respectively in both of their opening away games of the new season and have now added City to the impressive list.

On-loan Chelsea winger Victor Moses broke the deadlock as early as the sixth minute with a stunning effort from range and then Diafra Sakho doubled the lead for the visitors just after the half hour mark.

City handed a full debut to summer signing Kevin De Bruyne and he reduced the deficit with a brilliant strike in first-half injury time and many would have expected the home side to complete the comeback after the break and go on to preserve their 100% start to the league campaign.

However, the United defenders and goalkeeper Adrian were superb in the second half and withstood heavy pressure to record yet another shock victory on the road.

Take a look at the reaction from many on Twitter:

Emirates, Anfield, Etihad. I can’t get my head round it. There’s something special about this West Ham team. pic.twitter.com/vop6RSNbvo

Now tell me West Ham made a mistake by letting Allardyce leave. Bilic is our future. Stunning! #COYIN

Slaven Bilic is going to throw the best party when West Ham win the league pic.twitter.com/ePmjHxdeUO

Bilic is the man!