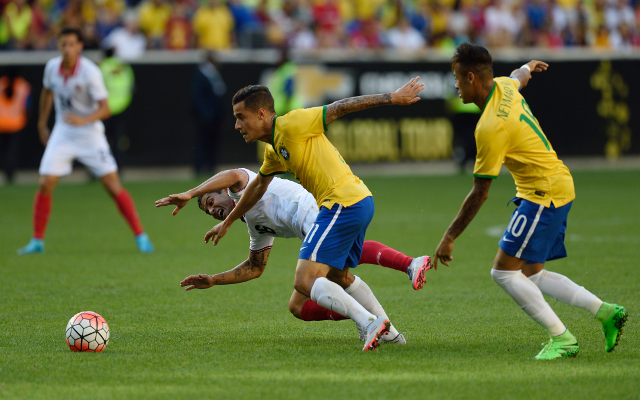 Barcelona have been strongly linked with an interest in Liverpool playmaker Philippe Coutinho of late and comments made by fellow Brazilian Neymar appear to suggest that the La Liga side are set to conduct another push to ‘tap-up’ an Anfield star according to the Daily Mail.

Brendan Rodgers may well fear a similar situation arising with regards to Coutinho following the statement made by Neymar.

‘Coutinho is a crack (top player) and I would like to play alongside him for Barcelona. He has the level to play for Barca’.

Liverpool failed to retain their Champions League berth and haven’t started the season well and as such Coutinho may be open to a move away from the Merseyside outfit who helped re-ignite his stagnating career.

Rodgers took something of a calculated risk when he invested £8.5m in Coutinho, who was struggling for game time at Inter Milan at the time, but the creative flair player has more than repaid the faith shown in him.

Coutinho’s form since moving to the Premier League has helped secure a return to the Brazilian national team set-up, which has seen him reunited with long-term friend Neymar.