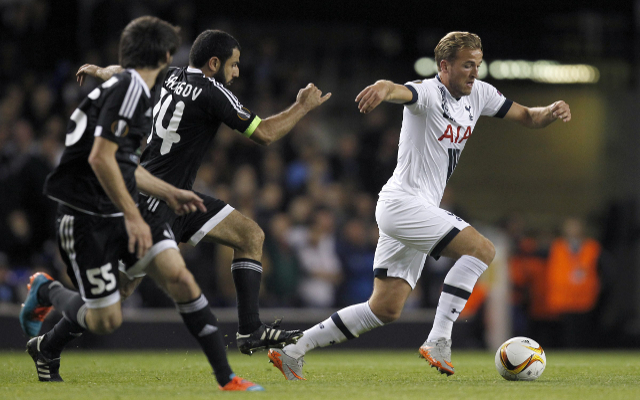 Tottenham forward Harry Kane was always going to struggle to hit the same dizzy heights of 2014/15 and is yet to net this term but team-mate Jan Vertonghen believes the England international will soon find his feet again according to Goal.com.

The 22-year-old White Hart marksman scored 31 goals in all competitions over the course of the last campaign, 21 of those coming in Premier League action, but Kane is yet to net this term in seven appearances.

Belgian defender Vertonghen has backed Kane to get back into the groove, stating;

“He has just been a bit unlucky. He scored for England and in the training sessions he has been doing very well, so the goals will come,”

“He’s not a guy who will just have one good season and then you never see him again. He has the qualities to perform and the goals will come eventually.” Vertonghen added.

Despite Kane’s dry spell Mauricio Pochettino’s side have recently ground out good results, picking up successive 1-0 Premier League wins over Sunderland and Crystal Palace as well as a Europa League victory over Qarabag.

The recent arrival of South Korean Son Heung-Min has helped spare Kane some of the goal-scoring burden, the former Bayer Leverkusen man scoring three goals in his last two appearances.