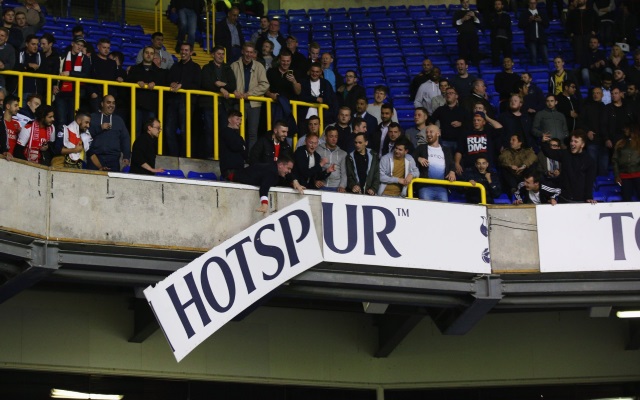 According to reports, Arsenal fans vandalised White Hart Lane after their side’s 2-1 Capital One Cup triumph over Tottenham Hotspur on Wednesday evening.

The Daily Mail report that supporters tore down signage around the ground and destroyed hoardings following the tight victory over their fierce local rivals.

The source proceed to note that the Gunners could well face an FA investigate following the incident after signs were dislodged from upper tiers, before falling towards supporters seated beneath.

Reports have also filtered in of violence between fans around the stadium after the contest,

The Gunners opened the scoring through Mathieu Flamini, whose effort was the only incident of note during a quiet opening 45 minutes.

However, the game tore into life after the break, as Spurs, perhaps buoyed by a half-time pep talk from Mauricio Pochettino, took the contest to their opponents.

Calum Chambers deflected an effort from Nacer Chadli past David Ospina as Spurs upped the ante, but it was Arsenal who ultimately secured the win.

Flamini, enjoying an enlightened evening, won the match with a delightful volley 12 minutes before the end of the match that left Michel Vorm with no chance.