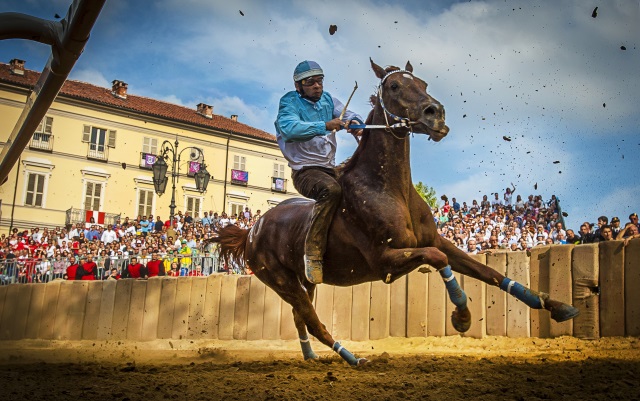 Corruption and bribery are two of the most compelling themes in the world of sport.

No one wants them to exist, but everyone loves reading and talking about them.

The film Palio—which hits cinemas on Friday—explores these themes in the world of horse racing. The movie investigates the Palio—the historic race that takes place in the heart of Siena—and considers why no one wants to do anything about the ‘dark side’ of the sport, despite being aware of its existence.

The horse race takes place twice a year—on July 2 and August 16—and draws numerous amounts of tourists to the beautiful Italian city.

In the piece, which features talking heads and vintage footage, director Cosmina Spender explores the web of intrigue that surrounds the event.

The film is a thrilling adventure, a fascinating story and an exhilarating ride, check out the Palio trailer below.

Its key themes are particularly pertinent for football fans at the moment, in light of the ongoing controversy surrounding Fifa and some of the key figures in the game’s hierarchy.

On Friday, the BBC reported that prosecutors in Switzerland had opened a criminal investigation into Sepp Blatter, the head of world football’s governing body.

The sporting politician is being investigated “on suspicion of criminal mismanagement as well as – alternatively – on suspicion of misappropriation.”

It remains to be seen whether the latest scandal represents the end of the road for the 79 year old.

Palio is released across the UK on September 25; you can purchase Palio tickets here and check out the official Palio trailer.