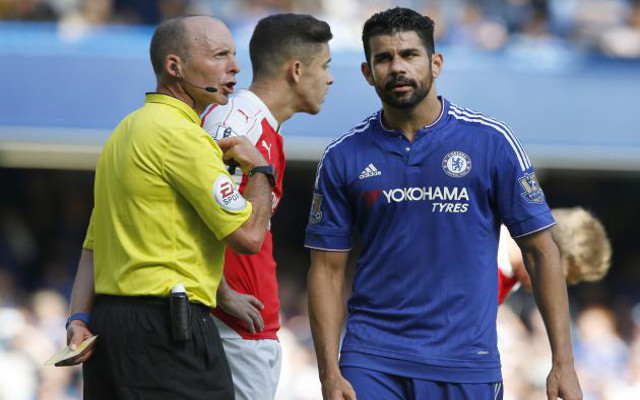 As Arsenal secured a convincing win over Leicester City, Chelsea were held to a draw against winless Newcastle United. Gunners fans didn’t miss the opportunity to poke some fun at their rivals’ inability to win without a certain now-notorious referee.

Taking to Twitter, numerous Arsenal fans pointed out that the absence of referee Mike Dean contributed to Chelsea’s struggles this past weekend.

During last week’s 2-0 win for Chelsea, Dean issued a red card to Gabriel while only issuing a single yellow card to Diego Costa despite numerous highly-visible instances of the Chelsea striker grabbing an Arsenal player’s face, his neck and even knocking a player to the ground.

So why don’t Chelsea bring on there best player? Is Mike Dean injured???

Shame that Chelsea is missing a vital member of their squad in Mike Dean.

Arsenal got a measure of revenge the following week though, beating undefeated Leicester City in a 5-2 romp, while Diego Costa was issued with a suspension for violent conduction by the FA following his antics in last weekend’s London derby.

A petition to restrict Mike Dean’s officiating reached over 100,000 signatures, but the FA did not punish the referee for his decisions in the match.

Over a three-game span prior to the draw against Newcastle United, Chelsea defeated Maccabi Tel-Aviv at home in the Champions League (an easy 4-0 romp), bested Arsenal 2-0 thanks to the aforementioned poor officiating, and finally overcame Walsall 4-1 away in the League Cup Third Round.

Chelsea will face their hardest test of their Champions League table on Tuesday when they head to Portugal to take on FC Porto. Arsenal, meanwhile, get one of their easier matchups with Greek giants Olympiacos headed to Emirates Stadium.