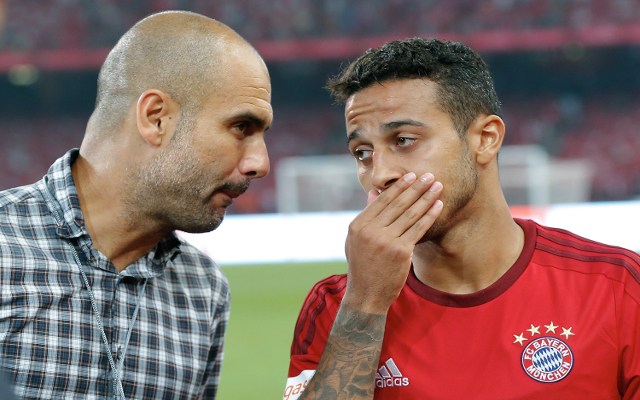 Manchester City have set their sights on Bayern Munich midfielder Thiago Alcantara, according to Goal.com.

The former Barcelona man has started four of Bayern Munich’s seven Bundesliga fixtures this season and is a player Pep Guardiola would be loath to lose.

Goal.com believes that Man City see the 24-year-old as an alternative to top target Paul Pogba, who would cost far more than Thiago Alcantara, according to Goal.

One would have to wonder quite where Alcantara would fit into Manuel Pellegrini’s starting eleven, with the Chilean able to field the likes of Yaya Toure, Fernandinho, Fernando and Fabian Delph in central midfield roles.

Thiago Alcantara struggled to make a sustained impact during his time at the Nou Camp, and in his first season at the Allianz Arena, the cultured midfielder managed just 11 Bundesliga starts. Last term, he was restricted to just five domestic league starts due to injury issues.

In many ways the Italian-born Spanish international is still to fulfil his obvious potential and will hope to cement his spot in the Bayern Munich side this term.

Goal.com points out that Thiago Alcantara only signed a new long-term contract, which runs until 2019, last month and as such, any move away from the Bavarian giants seems unlikely.