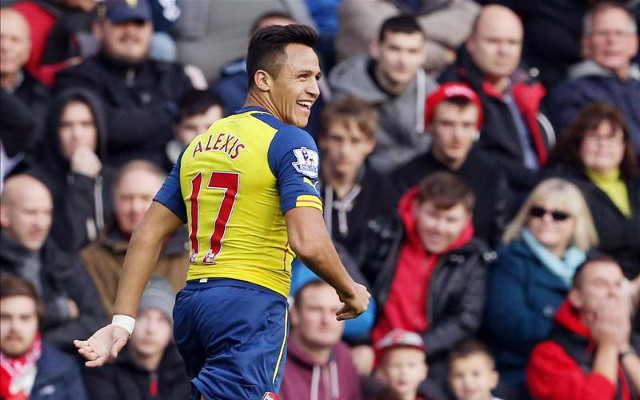 Arsenal striker Alexis Sanchez reminded everyone why he’s one of the best in the world after a hat-trick this week, and his scoring excellence earned the praise of one of the Premier League’s all-time greats.

In a column for the Daily Mail, Liverpool legend Jamie Redknapp heaped praise on the Chilean scoring machine, and said that when Arsenal start Sanchez they are a much more dangerous team.

“What a performance from the Arsenal man,” Redknapp wrote.

“I was watching him last season with (Arsenal legend) Thierry Henry and we agreed that when he plays, Arsenal are a real force. I bet Arsene Wenger is delighted he is back to his best.

“Arsenal still have problems at the back, as Leicester proved but with Sanchez they can outscore anyone.

“His hat-trick was like his goalscoring career in a nutshell. His third in particular was a beauty.”

Redknapp, who played midfielder for Liverpool from 1991 to 2002 and made 17 caps for England, believes that Sanchez’s return to form combined with their recent win over Tottenham Hotspur in the League Cup could be the spark that starts a serious run.

“The win against Spurs was a big result and with Sanchez now fit and firing Arsenal could go on a bit of a run,” he added.

Arsenal acquired Sanchez from Barcelona on July 10, 2014 and he quickly rose to the top of the Gunners’ depth chart, easily replacing Olivier Giroud as the primary forward and scoring 16 league goals (25 total goals) as Arsenal finished third on the Premier League table and won the FA Cup.

Sanchez went six straight matches without scoring a goal at the beginning of the season but finally broke through with three goals against previously unbeaten Leicester City. In doing so, he also became the first player to record a hat-trick in the Premier League, La Liga and Serie A.

Arsenal face Olympiacos in the second match of the Champions League group stage on Tuesday.