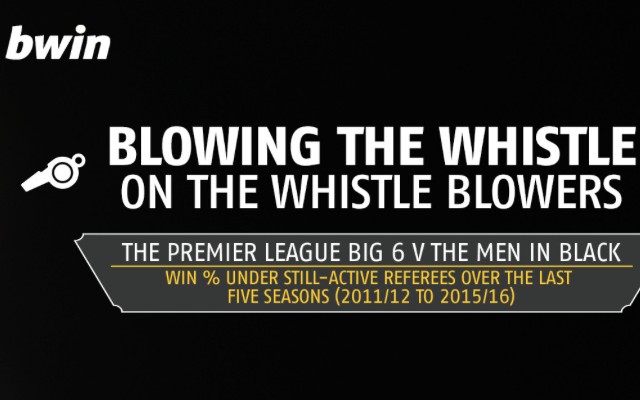 They blame him, not only for their recent 2-0 loss at Chelsea, but for many of their disappointing results in recent years.

While we cannot confirm or deny whether Arsenal’s hatred for Dean is justified or reciprocated, we can confirm that the Gunners have a pretty awful record when he takes charge of their games.

A recent study by German bookie Bwin proves that Arsenal’s win percentage in Dean’s games – 33.3% – is lower than their success rate with each and all of his colleagues.

Conversely, Arsene Wenger’s men have a perfect record under the rule of West Yorkshire’s Jonathan Moss, who has taken charge of 11 Arsenal games in the past five seasons – all of which have resulted in three points for the Gunners.

Tottenham-supporting conspiracy theorists might suggest that Moss is a fully-fledged Gooner, because Spurs have only won 33.33% of matches officiated by Arsenal’s favourite ref.

Bwin’s research perhaps reveals the foundation of Mourinho’s gripe with Mr Atkinson – the Blues have only won 41.18% of their league games in which he has been the man in black.

Mourinho is presumably much fonder of Neil Swarbrick, as Chelsea’s win percentage under his rule is a whopping 85.7%.

Tital rivals Manchester City have an even better Swarbrick record though – 100%!

Meanwhile, Liverpool’s Swarbrick win percentage is an appalling 28.57%. The Reds historically fare best when Craig Pawson has the whistle.

Manchester United’s least disliked ref should be Kevin Friend, under whom the Old Trafford side have won 90% of their league games.

Andre Marriner, who last took charge of Louis van Gaal’s men in a 3-0 defeat at Everton in April, is the ref who United have the worst win rate under – just 36.36%. 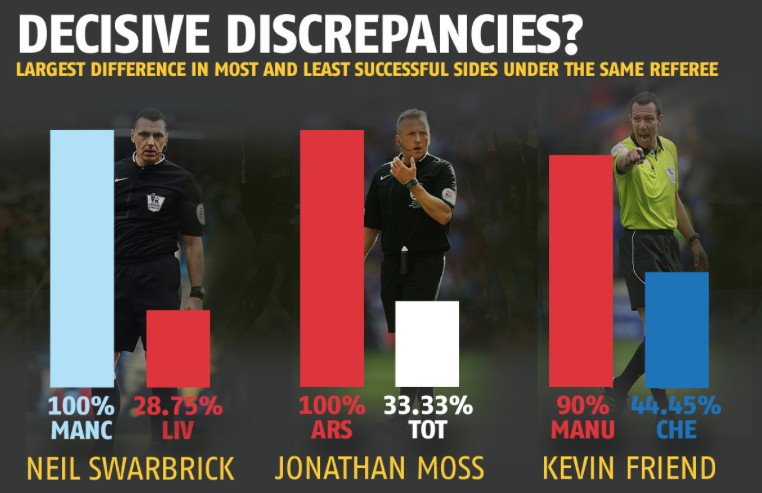