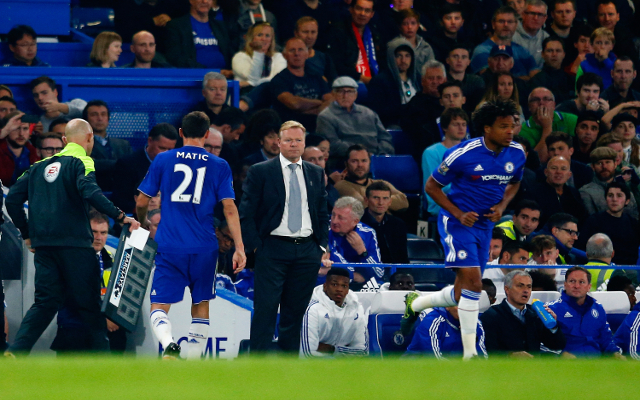 Jose Mourinho has moved to defend his decision to sub Serbian Nemanja Matic during Chelsea’s 3-1 home defeat to Southampton, the midfielder having himself come on as a half-time substitute.

It’s rare for a sub to be subbed and many may have surmised that Mourinho’s decision to replace Matic just 28 minutes after he has come on for Ramires, was in some way a sign of the Chelsea manager punishing the under-performing battler, a suggestion the Blues boss denies.

‘It was not humiliating,’

‘With the players, it is not easy. I like them, I trust them. I know they are good players but some of them are in a difficult moment – Matic is one of them. He is not playing well. He is not sharp defensively. He is making mistakes with the ball and not making the best decisions.

‘I brought him on because even though Ramires did a great job in the first half with [Sadio] Mane, with a yellow card and an inexperienced referee I was afraid of a second yellow card and I changed him for Matic.

‘Then when we concede a goal and I need to make a change. I want to play another striker, I have to take a player from the midfield. I kept Oscar because he is the one that creates more.

‘I kept [Cesc] Fabregas because he is the one – maybe because of his formation in a difficult place to play which is Barcelona – who copes better with the pressure. Even not playing well, his emotional stability is high.

‘So I decided to take off Matic but I like the player very much, I have a fantastic relationship with the boy. Humiliating him? For sure, I was not.’ added Mourinho in quotes reported by the Daily Mail.

Matic was inspired last season but has struggled, like most of his fellow Chelsea stars, for form this term and as such he may not have been all that surprised that he was hauled off when Mourinho was in need of boosting his attack.