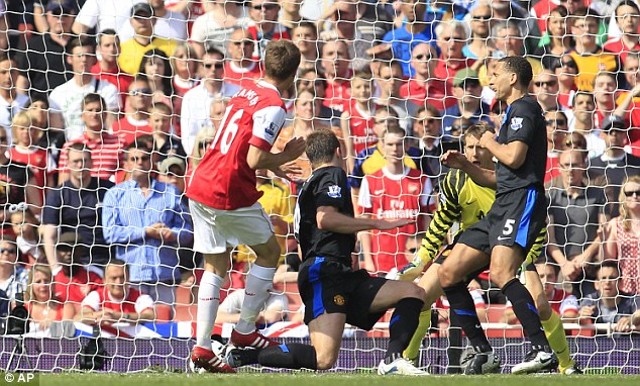 Alex Song – Currently into a second season on loan at West Ham from Barcelona, it’s fair to say Alex Song has not really moved on after some fine form for Arsenal between 2010 and 2012.

Jack Wilshere – Still at Arsenal but perpetually injured, Jack Wilshere put in a fine display against Manchester United that day, but has really stuggled to fulfill his potential.

Aaron Ramsey – Another survivor from that day, Aaron Ramsey is still a regular for the Gunners and has since helped them to two wins in the FA Cup, including with the winning goal against Hull City in 2014.

Theo Walcott – Another who is still at the club but struggling with injuries, Theo Walcott remains much the same inconsistent and enigmatic player that he was back then.

Samir Nasri – Now at Manchester City (where else?), Samir Nasri enjoyed his best season for Arsenal that year before forcing an exit, and he has become hated by his old fans.

Robin van Persie – No one could have predicted it at the time, but Robin van Persie was at the start of the best form of his career that season, which eventually led to a controversial move to Manchester United in 2012. Now at Fenerbahce after burning out at Old Trafford, but he does at least have a Premier League title winners’ medal to show for it.