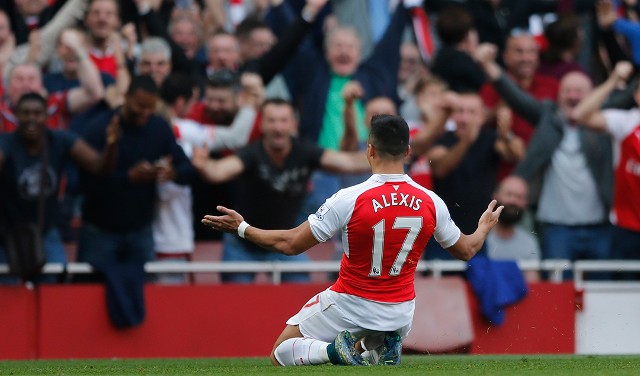 Arsenal 3-0 Manchester United is not a scoreline seen in the Premier League since all the way back in 1998, when Sir Alex Ferguson still hadn’t worked out his foolproof method for beating the Gunners.

Still, that was the score after 17 minutes at the Emirates Stadium this Sunday, and that is how it stayed until full time. Arsenal are now unbeaten in their last three games against the Red Devils, a huge improvement on a dire recent record. Indeed, it is worth remembering that this was their first home win against United since 2011, and only their fourth since moving to the Emirates Stadium in 2006.

And yet, there is a trend growing for Arsenal in the big games. In 2015, they have played eleven games so far against Chelsea, Manchester City, Manchester United, Liverpool and Tottenham in all competitions, with an overall record of: W6 D3 L2. A 1-0 win over Chelsea in the Community Shield brought more silverware and ended an unwanted record for Arsene Wenger against Jose Mourinho, while this 3-0 win over United will be as impressive as the 4-1 over Liverpool and 2-0 away to Manchester City last season.

The title race this year could be closer than ever, with no one team looking like running away with it like Chelsea did last term. Manchester City currently sit top, but recent defeats to West Ham and Spurs highlight significant weaknesses in defence and a tendancy to throw games away that has been shown before under Manuel Pellegrini. United, meanwhile, remain something of an unknown quantity under Louis van Gaal; there are some fine performances, like against Liverpool, but there are equally baffling games like the one yesterday, which was over after six minutes – worryingly for Reds fans, the Dutchman himself couldn’t explain what had happened to his players.

Elsewhere, Mourinho’s confidence-ridden Chelsea are surely out of the running already, and Liverpool are of course not in contention barring an absolute miracle of a turnaround under whoever their next manager proves to be, though even Jurgen Klopp will struggle to work his magic with that squad.

If Arsenal can maintain this improved record in the big games, they may finally have enough to go the distance in the Premier League title race. In the past, crushing defeats like the 5-1 at Anfield and the 6-0 at Stamford Bridge in 2013/14 have ended their hopes and destroyed their belief, but it looks like they may be a thing of the past. We know Arsenal can, for the most part, do the job against the so-called lesser sides, so if they put this big-game hoodoo behind them, they can finally put together a strong enough run to the top of the pile by the end of this campaign.