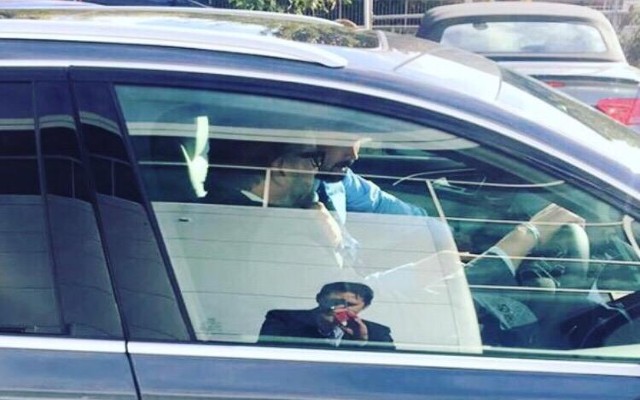 A recent picture of a bespectacled, salt-and-pepper bearded man at a Liverpool Audi dealership has set Twitter ablaze with theories that former Borussia Dortmund manager Jurgen Klopp has arrived to sign a deal at Anfield.

With recent reports that Klopp will be announced as the new Liverpool boss before the weekend, the image first posted to Twitter by Chris Owens (@ChrisOwens23) has sent Reds’ fans excitement into overdrive. Klopp, who led Dortmund to two Bundesliga titles, four German football cups and a Champions League final, has been on sabbatical for the past year after leaving Germany and has been one of the hottest managerial targets in Europe.

That Klopp Audi pic looks genuine. Must be in Liverpool — James (@jwsldn) October 7, 2015

Klopp is already in liverpool. He was picking an Audi up today on the dock road. — Mark Mccaw (@markmccaw30) October 7, 2015

Any liverpool fans out there, jurgen klopp has just bought a new Audi from Liverpool Audi dealership a a source has just shown me pictures

The picture does raise a fairly significant question that some were quick to point out: If it is Klopp, how would someone as widely-known as him be able to enter England and get through the airport without anyone noticing it was him?

Liverpool fired former manager Brendan Rodgers less than a day after the club finished a 1-1 draw against Everton. Rodgers entered the season on the hot seat after a 6th place finish on the table last year.

With the club’s current 10th place spot combined with their inability to get an outright win over lowly Carlisle United in the League Cup or either Bordeaux or Sion in the Europa League, Rodgers’ job was unsustainable.