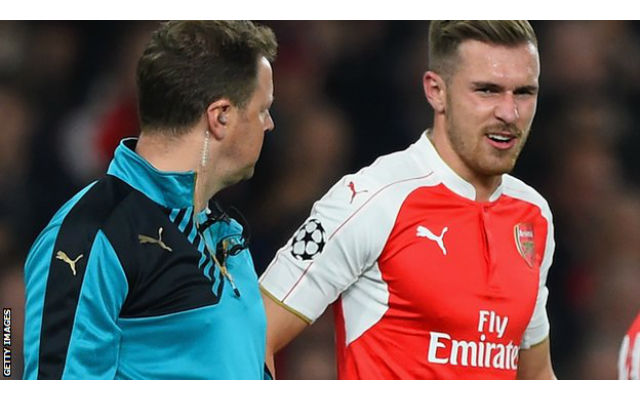 Arsenal are being made to sweat on the fitness of midfielder Aaron Ramsey, who could miss ten games over a six week stretch after injuring his hamstring during the 2-0 victory over Bayern Munich on Tuesday night, the Metro reports.

Goals from Olivier Giroud and Mesut Ozil gave The Gunners their first points in this season’s Champions League, but the celebrations were marred by the Welsh international being forced off during the second half (via Metro).

The blow will be harder to take given that Ramsey was just starting to come into some kind of form after he bagged his first goal of the season during the 3-0 victory over Watford at the weekend.

But now a report on Goal.com is claiming that the 24-year-old could be ruled out for up to six weeks that will see him miss crucial clashes with the likes of Tottenham, Dinamo Zagreb and the reverse fixture against Bayern.

Manager Arsene Wenger confirmed that Ramsey was upset about having to come off, and feeling disheartened at picking up another injury.

“He’s alright but very down. He told me he injured his hamstring. It’s quite a tough one,” said Wenger.