Two Arsenal stars have made it into the UEFA Champions League Team of the Week, highlighting their good work in the victory over Bayern Munich on Tuesday.

Defender Per Mertesacker and goalkeeper Petr Cech have picked up the honour for playing their respective parts in keeping the prolific Robert Lewandowski at bay during the Emirates clash.

Elsewhere, former Manchester United striker Javier Hernandez has been included thanks to the brace he bagged during a thrilling 4-4 encounter with Roma. Danielle De Rossi also makes the cut thanks to his own brace during that particular match.

Paris Saint Germain defender Thiago Silva and Serge Aurier have also been rewarded for keeping a clean sheet against Real Madrid, while striker Hulk earns his spot for helping Zenit St Petersburg remain the only side in the competition with a 100% record so far.

See the fill team below… 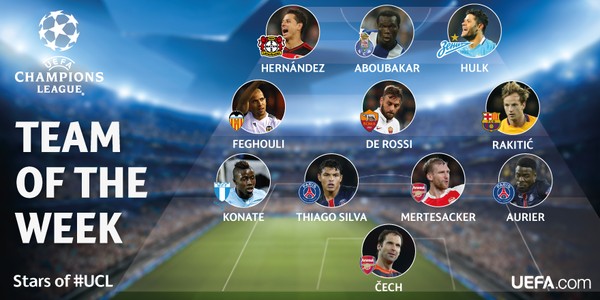