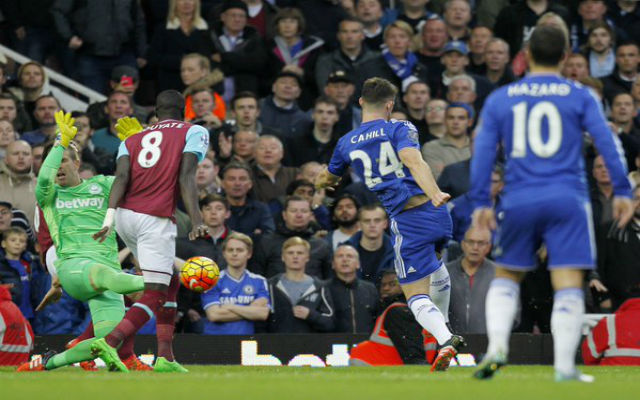 Chelsea lost 2-1 to West Ham at Upton Park on Saturday afternoon, heaping yet more pressure on under-fire boss Jose Mourinho. Andy Carroll was the hero for the hosts, heading home the winner in the 80th minute.

The first half was full of incident. It took just seventeen minutes for Mauro Zarate to fire the hosts ahead after Chelsea failed to clear a corner, and twenty minutes later Manuel Lanzini ran clear but over an onrushing Begovic and over the bar.

Fabregas then saw a goal correctly disallowed for offside, and on the stroke of half time Nemanja Matic was sent off after two yellow cards in nine minutes.

Jose Mourinho’s half time team talk was made much more difficult after he was also sent off for a fracas in the tunnel, and he could now face a one-match stadium ban.

Despite the problems, Chelsea emerged as an invigorated side in the second half. They got their reward when Gary Cahill volleyed a corner past Adrian in the 54th minute.

The goal knocked West Ham, but as the half wore on they started to assert their extra man. The winner eventually came with ten minutes to go, as Carroll rose above everyone else to loop a header into the net. It was his first goal since January.

The result moves West Ham up to second, but leaves Chelsea down in a lowly fifteenth.

Next up for Chelsea is a trip to Stoke in the League Cup on Wednesday. They welcome Liverpool to Stamford Bridge next weekend. West Ham travel to Watford on Saturday.

Was helpless for the West Ham goal and made a couple of other good saves.

Poor marking at times, can’t have much longer left at this level.

Not great defensively, but got the equaliser.

Exposed several times, and his lack of positional awareness cost Matic one of his yellow cards.

Quiet, but the best of the back four.