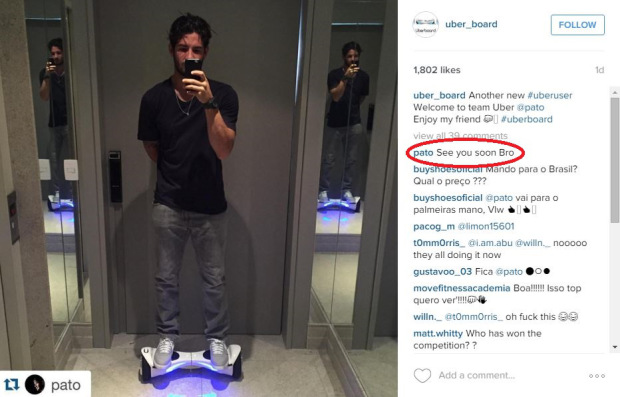 Has Alexandre Pato just dropped the biggest hint yet that he will be joining Liverpool in January?

In the latest Liverpool transfer news, the Brazil striker recently posted a picture of him on a hover-board, and thanked his friend ‘Michael’ from a company called ‘Uber-board’.

As reported by the Metro, the company’s HQ is on Green Lane in Liverpool, and Pato’s comment, where he says to Michael, ‘see you soon Bro’, could perhaps indicate that he will soon be paying a visit to his hover-board providing buddy in the near future.

Admittedly, the forward’ comments may just mean that he and Michael will be crossing paths somewhere else in the world soon, or perhaps Pato will be stopping by on Merseyside for a sojourn unrelated to transfer business.

However, his latest comments will doubtless see the rumour mill turn apace as the attacker continues to be linked with a move away from his homeland.

The Metro note that Italian journalist Alfredo Pedulla recently claimed that Pato had agreed ‘in principle’ to join Liverpool in a £14.2 million deal, although we await official confirmation.