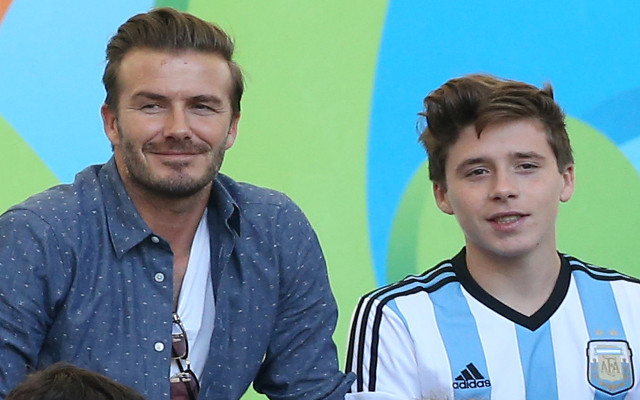 In his long and storied career at Manchester United and throughout Europe, David Beckham embarrassed more than a few opponents by slipping the ball between his legs. This past week though, Beckham got a taste of his own medicine – at the hands of his son no less.

Before representing the Great Britain and Ireland side for the UNICEF charity game against a Rest of the World side at Old Trafford, Brooklyn Beckham decided to practice on the sidelines by nutmegging his famous father while he was stretching.

The match took place in honor of David Beckham’s 10-year anniversary as UNICEF’s ambassador and included legends from Man United and the world at large.

In a touching moment during the game, David Beckham would sub himself out for his son, and the young footballer would share the pitch with such legends as Paul Scholes, Ryan Giggs, Ronaldinho and Michael Owen en route to a 3-1 win.

You can see the video in its entirety here: