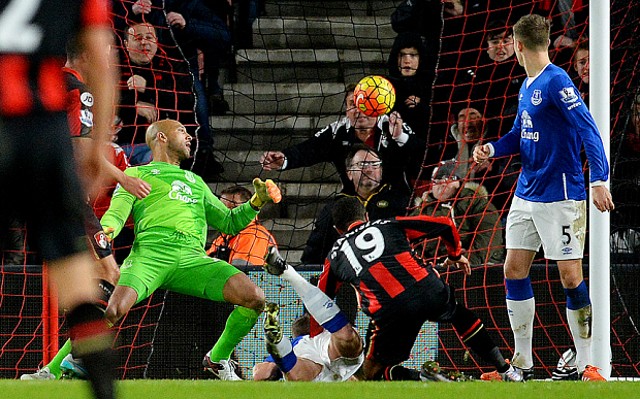 Casual football fans who saw the Bournemouth-Everton match on the schedule may have thought that the Toffees would blow away the Premier League newcomers in the same way they destroyed Aston Villa last week. What happened instead was the best match of the season.

Here are the Bournemouth Everton Highlights from the 3-3 draw at Goldsands Stadium:

The match started almost as anyone would imagine, with an early score by Everton thanks to Ramiro Funes Mori.

Everton superstar Romelu Lukaku – one week removed from becoming only the fifth player to score 50 Premier League goals before age 23 – added to his remarkable tally with an absolutely stunning shot that slipped past Adam Federici to give Everton a 2-0 halftime lead.

For the first 35 minutes of the second half Bournemouth was remained scoreless and appeared poised to head back to the lockers in shame – but then the remarkable comeback began.

From a whopping 25 yards out, Adam Smith scored shot a breathtaking strike that went over everyone’s heads – including Everton GK Tim Howard’s and right into the to left corner to make the match Bournemouth 1-2 Everton.

At the 86′ mark, just minutes later, Junior Stanislas would be in position to receive the receive the pass from Bournemouth FW Glenn Murray, who made the game-tying score to make the match 2-2 going into extra time.

SEE MORE:
(Video) Premier League Highlights: The best goals from across the EPL as they go in
Man City Guardiola: 6 managers to bring title to Etihad should Pep refuse to replace Pellegrini

With +5 added to the clock, Ross Barkley seemingly ended the game with a shot that slipped past the defence to make the game Bournemouth 2-3 Everton. But an early pitch invasion was cut short due to the referees’ decision to add some more time.

Bournemouth capitalized on their last gasp, with Junior Stalislas slipping past the Everton defence to receive a cross that he turned into a perfect header to end the game in a stunning 3-3 draw.

For Bournemouth, that match may go down in history as one of the greatest draws in the club’s history. As for Everton, they miss out on a golden opportunity to finish the week in the top six and find themselves at seventh.