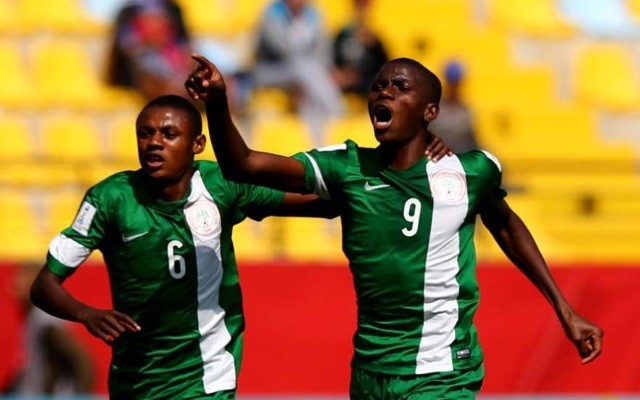 The wonderkid was part of the stunning Nigeria team that won the Fifa U-17 World Cup earlier in the year, and also lifted the U-17 Golden Ball for top scoring at the event.

In fact, not only did Osimhen bag more goals at the competition—which took place in Chile last month—he also broke Florent Sinama-Pongolle’s long-standing goal-scoring record in the tournament by bagging ten goals during the event—finding the net in every round.

As a result of his golden showing, Osimhen has been called up by the Nigeria U-23 side for the ongoing African U-23 championship in Senegal.

This is despite him being only 16, and considerably younger than the other players in Samson Siasia’s 21-man squad.

However, speaking to Nigerian source Punch [as per Goal.com], former Super Eagles skipper Chukwu has backed Osimhen to thrive in the tournament and likened him to Brazilian legend Pele and current Selecao star Neymar.

“Osimhen is a talented player and he is not too young to play in the Under-23 team,” the former skipper began.

“Many world-class players began at a very young age. Pele and Neymar started playing for the Brazilian senior national team when they were very young.

“Osimhen is not even too young to play in the Super Eagles. The Under 23 team is a good place for him to develop and I believe his participation in the tournament (Senegal 2015) will do him a lot of good as well as helping the team.”

The attacker has been linked with a move to Tottenham Hotspur, although the player’s agent confirmed last month—as per the International Business Times—that the teenager had not yet agreed a deal to move to White Hart Lane.

This may open the door for Arsenal to make a move for the player, with the Metro [quoting Soccernet], suggesting that the Gunners are in talks to sign the frontman.