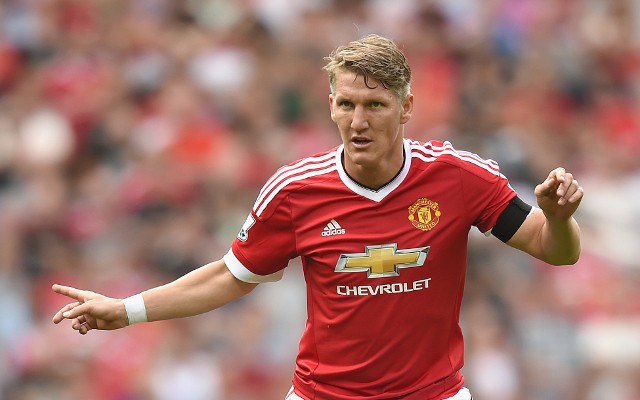 The 53-year-old was speaking to ESPN FC, and explained that although he considered the German international a world-class player, he doesn’t feel as though he is contributing as much of his game as he could given Louis van Gaal’s tactics and style of play.

Van Gaal has been widely criticised for the philosophy that he has implemented at Old Trafford, as noted by The Telegraph, which sees his team play a slow and methodical game which in turn has led to their troubles scoring goals consistently.

United have scored just 20 goals in 14 games so far this season, the worst tally out of the top five clubs in the Premier League, and although they remain just a point adrift of joint league leaders Manchester City and Leicester City, it hasn’t allowed their Dutch manager to escape scrutiny.

That is part of the large problem at the club currently, although Nicol has pinpointed Schweinsteiger as the most disappointing aspect of the team’s play as he believes that the former Bayern Munich captain can offer so much more from an offensive point of view.

The ESPN pundit insisted that he wasn’t down to a lack of quality around him despite the fact that he had the likes of Arjen Robben and Thomas Muller around him in Bavaria, as he believes that Wayne Rooney and Anthony Martial offer enough to give him options.

As a result, he insisted that it came down to the fact that the 31-year-old isn’t given the freedom to completely express himself as he is playing his role for the team and to the orders of Van Gaal.

The Red Devils face West Ham United on Saturday afternoon looking to keep the pressure on their title rivals, before they face a decisive clash with Wolfsburg in the Champions League on December 8 which will determine whether or not they qualify for the knockout stages of the tournament.