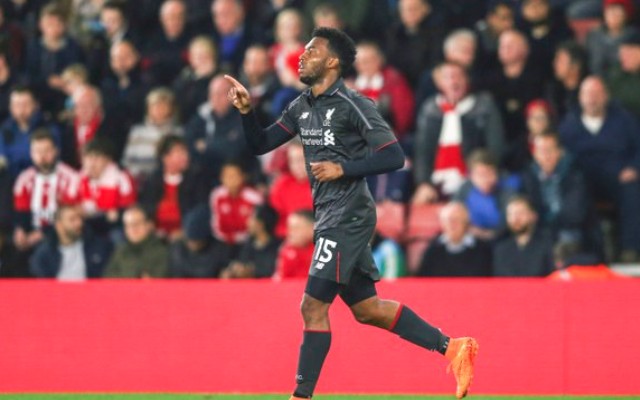 Daniel Sturridge came back with a bang for Liverpool tonight, and our friends at Empire of the Kop have assembled some of the best Twitter reaction to his first-half brace against Southampton…

It’s been easy to forget through his absence that Daniel Sturridge is one of the best strikers in Europe when he’s fit, and his clinical finishing against Southampton in the first-half of the League Cup tie at St. Mary’s tonight proves as much.

Despite going 1-0 down, Sturridge and co. fought back to take a 2-1 lead, with the fit again striker proving his undoubted ability with two strikes before half-time.

STURRIDGE SCORES! THE WRIGGLY ARMS ARE BACK

Sturridge is the best in the world now — Sufyan (@SufyanZia) December 2, 2015

Sturridge when he’s fit is up there with the best!! Just keeping him fit!!

Wow, 2-1 Liverpool; Daniel Sturridge with another brilliant goal, Emre Can with the delicious turn and outside the boot chipped through ball — Off The Ball (@offtheball) December 2, 2015

Fucking hell how much have we missed that. Lethal. #LFC #Sturridge