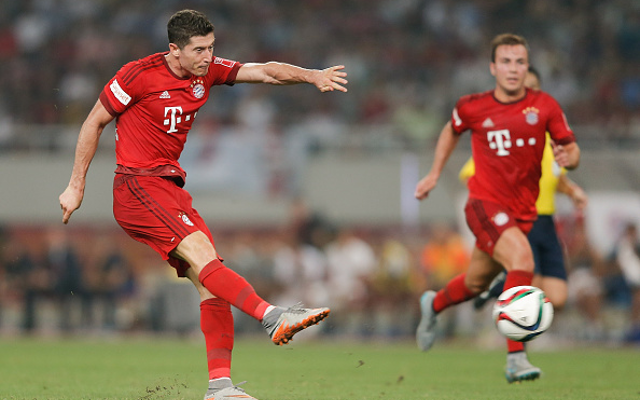 Established Spanish journalist Pipi Estrada has confirmed that both Robert Lewandowski and Alvaro Morata will be playing for Real Madrid next season.

Bayern Munich superstar Lewandowski has scored 14 goals in 13 appearances in the Bundesliga this season, and has subsequently been linked with a move to the Premier League. Last month, Daily Star reported that Arsenal, Manchester City, Manchester United and Liverpool were all keen on the Polish forward.

While United, City and Arsenal may be more likely candidates to sign the player, as they are more regular Champions League qualifiers than Liverpool, the presence of Jurgen Klopp—who oversaw Lewandowski’s development at Borussia Dortmund—may have given the Reds the edge over their EPL rivals [The Sun].

However, according to Cadena Copa journalist Pipi Estrada, speaking on El Chiringuito [as per Le 10 Sport], the EPL trio are set to miss out on the lethal frontman.

“Morata will come to Madrid for around €32 or €42m,” the journalist continued, “and will receive an annual salary of €4m.”

The pair may be being considered as replacements for Cristiano Ronaldo and Karim Benzema, the former has been heavily linked with a move away from the Bernabeu—both Manchester United and Paris Saint-Germain are understood to be keen on the hitman The Sun [via the Express]—while Florentino Perez is reportedly prepared to offload the French forward following his off-field controversies AS [via Le 10 Sport].

Morata left Real for Juventus in 2014 after failing to establish himself at the Bernabeu, but after scoring eight goals in 29 for the Old Lady in Serie A last season (and a hatful in the Champions League), he could be the ideal candidate to return and lead the line for Los Blancos.