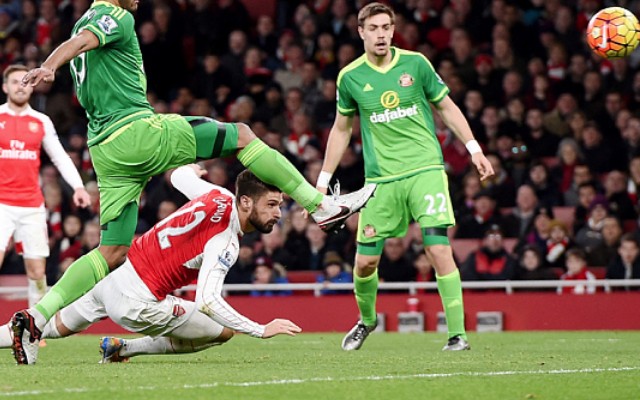 Arsenal moved up to second in the Premier League table by beating Sunderland 3-1 in North London on Saturday afternoon.

It was an action-packed game, so let’s give thanks to our friends at top Gunners blog All Arsenal, who have produced a detailed match report with fanatix video news clips. Check it out below.

We really weren’t at our best against Sunderland this past Saturday afternoon, but thankfully we still came away with all three points. The final scoreline was perhaps a little flattering, and despite our 3-1 win it was tense right until the last few minutes.

It was a shaky start, but thankfully Fabio Borini is absolutely rubbish. He spurned a great opportunity after a quick counter, firing a shot directly at Petr Cech – a routine save for the Czech international.

Cech was called into action a few more times before we really got going, and things just weren’t clicking for us up front. Our wide players were attempting to fire balls into the box, but there were a huge number of poor balls played, while Olivier Giroud was crowded out whenever a ball did actually look like having a chance of reaching him.

We looked defensively vulnerable, with Mathieu Flamini just not offering the same level of protection as Francis Coquelin. Aaron Ramsey was far too offensive at times too, and our back line was struggling – relying on Koscielny to race out and make some key interceptions.

The pressure was eased slightly when we got the opening goal just after the half hour mark, with Mesut Özil involved once again. He put Joel Campbell through on goal with a superb defence splitting pass, and the Costa Rican finished with aplomb. 1-0.

We looked comfortable with the lead, and were by far the better team for the next ten minutes. We gave away another soft goal just before half time however, allowing Sunderland to go into the break level.

Koscielny gave away a needless free kick in a relatively dangerous area, coming in late on young Duncan Watmore – it looked painful. The ball was fired into the box, and Olivier Giroud swung his left boot clumsily at it – put off by Ola Toivonen’s presence – slicing it into his own net. 1-1.

We probably should have been ahead again just before the whistle, but with the last action of the game Aaron Ramsey spurned a great chance, firing a Nacho Monreal cut-back into the side netting.

We’d been average in the first half, and we weren’t much better in the second. We still looked vulnerable on the counter, but couldn’t seem to get going at the other end.

Cech made one fantastic save to keep things level, a reaction stop denying Steven Fletcher on the line.

Thankfully we showed our class to take the lead once again, moving up a gear and showing some real Arsenal magic. Some great work from Monreal and Ramsey left the Sunderland defence static, and Giroud was able to dive in and head the Welshman’s cross past Costel Pantillimon. 2-1.

The Black Cats almost equalised late on, Hector Bellerin switching off and allowing Patrick van Aanholt through on goal. He blazed it over the bar, and there would have been fury if he had have scored as he looked to be offside.

We quickly went up the other end to grab the goal that sealed the game, Ramsey pouncing on a Calum Chambers shot-cum-cross to make it 3-1.

It was an injury ravaged Arsenal side that certainly wasn’t at its best, but we got the win and made up some ground on the teams ahead of us. Manchester United drew against West Ham and Manchester City lost against Stoke City, so it was only new league leaders Leicester City that keep the distance.