Frustration has been building up at goal-starved Old Trafford for months, and it poured out of the home support this afternoon following Manchester United’s goalless stalemate with West Ham United.

A fourth 0-0 draw in six games in front of their own fans, and a fifth in nine in all competitions, saw the Red Devils booed off at full time as they missed the chance to go to the top of the table.

Captain Wayne Rooney has borne the brunt of much of the criticism. Although he has become England’s all-time leading scorer of late, he has found the net only twice in his last 18 Premier League games.

But Rooney was absent from the United lineup today and yet Louis van Gaal’s side remained slow and unadventurous in attack, managing only one shot on target throughout the 90 minutes.

Even restoring Anthony Martial to the central striking position from which he made such a tremendous start to his United career made little difference as the Frenchman lacked meaningful assistance.

The below graphic from Opta highlights how the No. 9 was isolated against West Ham, and also goes a long way to explaining why United are finding it hard to break teams down. 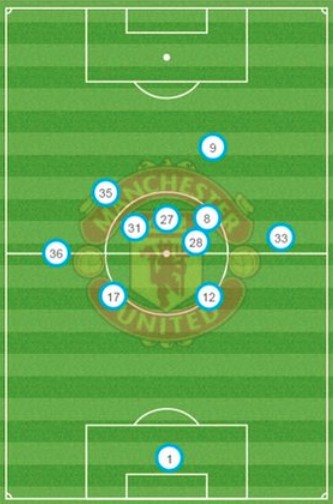 Martial, now without a goal in eight league outings, had fewer touches than any other United outfield player against the Hammers (46), perhaps attributable to the lack of support from his midfielders.

As per the graph, neither Jesse Lingard (35), Marouane Fellaini (27) or Juan Mata (8) were able to get close enough to Martial, and the latter two not fast enough to get to him quickly when he did get the ball.

Mata and Lingard’s narrow position also points to a lack of width, when you would have thought that Van Gaal would have made crossing a priority with Fellaini occupying an advanced position in the team.

The two wide men drifting infield also limits the space on offer to the midfielders. Take Martial and the full-backs out of the equation and United have seven players within 30 yards of each other.

The Red Devils would benefit from stretching the play and – this is no secret – introducing more pace to the team. Can they do that with their current personnel or do they need to invest in January?