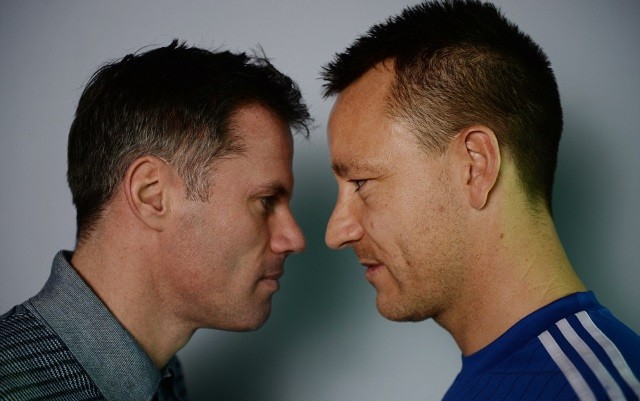 A photo featuring Chelsea legend John Terry squaring up to Liverpool great Jamie Carragher has seen speculation mount that the centre-back is being lined up as Gary Neville’s replacement on Monday Night Football.

Neville joined Sky Sports in 2011, and was picked—along with Carragher—as the face of MNF in 2014.

Since then, the pundit-pairing have gone on to transform the reputation of the show, making it one of the most-watched soccer segments of the weekend and impressing with their insight, tactical knowledge and humour.

However, Neville left the show earlier this week when he was appointed as Valencia manager, replacing the outgoing Nuno Espirito Santo.

Neville revealed that it would have hurt his ‘credibility’ if he’d have turned down the Liga BBVA giants, although he admitted that it was tough to leave Sky Sports and thanked the media company for their support.

Speculation over Neville’s replacement on the show has been circulating for days, with the likes of Thierry Henry, Jamie Redknapp, Brendan Rodgers and Liam Rosenior all tipped as potential replacements for the departing Manchester United great.

However, does this shot—published by the Daily Mail—suggest that it is Terry who is in line to replace Neville on the popular show?