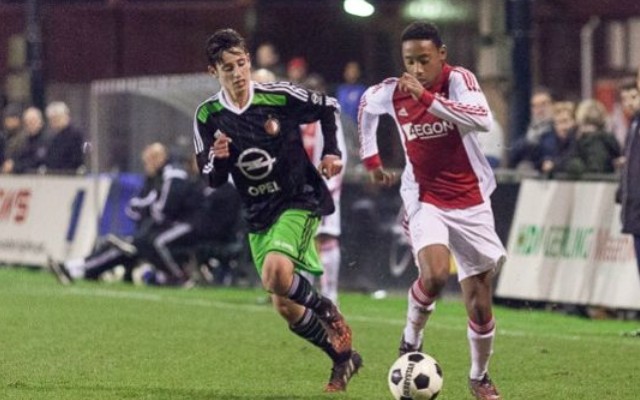 Manchester United have reportedly decided to move for teenage Ajax starlet Juan Familia-Castillo after a lengthy period of monitoring the midfielder.

According to the Daily Mail, United are “hopeful of closing a deal” for Familia-Castillo, having closely followed his progress since 2014.

The 15-year-old, who will celebrate his 16th birthday in January, seems to have developed at a rate which has impressed Red Devils scouts.

He is currently the captain of Holland’s Under-16 side and he regularly represents Ajax at Under-17 level.

Familia-Castillo is a versatile midfielder who is comfortable in the centre of the park and on the left flank.

He is left-footed and has the ability to score goals and pick out long-range passes, as the video below demonstrates.

By all accounts, Familia-Castillo sounds like he would be an excellent young signing who could go on to become a senior star at Old Trafford in the future.

However, United supporters may argue to the club need to focus on recruiting players who are able to improve the first team now. The Red Devils have failed to score in five of their last nine games in all competitions.

Despite sitting fourth in the Premier League table – just three points below leaders Leicester City – some United fans booed their team off the pitch following Saturday’s 0-0 draw at home to West Ham.