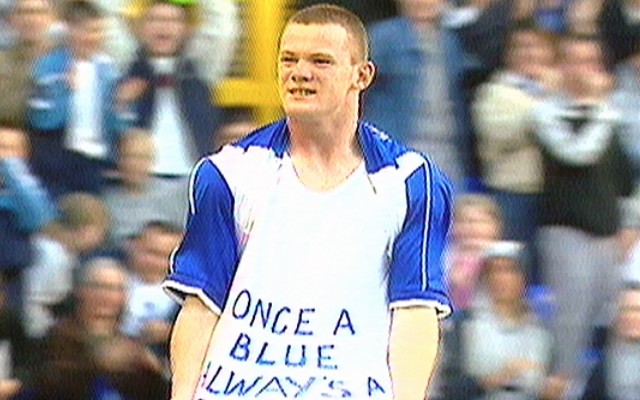 In 2002, after scoring a goal for Everton in the FA Youth Cup, Wayne Rooney lifted up his shirt to reveal a message: “Once a Blue, always a Blue”.

The picture (above) would be used against a teenage Rooney two years later when he left his boyhood club for the bright lights of Manchester United.

Evertonian hatred towards Rooney has slowly lessened over the years – as has his club form  – so, without any drama, he was able to return to Goodison Park with his son, Kai, to watch the Toffees take on Crystal Palace on Monday night.

Captain Rooney’s United side are currently in Germany, where they are to face Wolfsburg in a must-win Champions League group decider on Tuesday.

Rooney, who has only scored two goals in 12 Premier League starts this season, was left behind by United due to an ankle injury, according to the Daily Mail.